MaxPoint is one of the two softwares that I've heard of written for this job. TPoint being the other and as far as I'm told much better too. Since I already had full version of Maxpoint installed I fired it up to see what the go 'to' is... :)

The MaxPoint becomes the telescope hub so it can intercept any goto commands from apps such as planetarium TheSkyX, to transparently apply pointing corrections. I figured that I need to disable the alignment corrections in the EQMOD for this to be effective, but not quite sure about it yet.

Only requiring minimal setup, I kicked it off with a 25 star calibration routine, wasn't game enough to go for the default 100 stars!? I can see this is really written for permanent observatories with high grade mounts. My poor little EQ6 would probably overheat after 100 continuous slews.
Each slew followed by plate solve started to populate Calibration Observations table with calculated pointing errors. It also put little red 'X's on Sky Map representing the points its visited in the sky. I actually enjoyed sitting back and watching this whole process unfold before me. My polar alignment must have be good as all 25 slews yielded successful plate solves. So, I might actually give the 100 star calibration a go next time at the risk of my mount melting down.

I am using these screen shoot from Maim DL webpage to show the process in each stage. 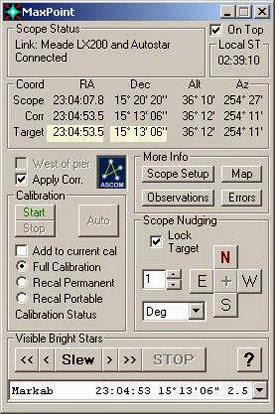 I can see that it has worked out my polar alignment accuracy as well and I might try its built-in Polar Align feature next time. I haven't gone into working out what the other figures exactly mean yet but test slews to targets in different parts of the sky definitely showed improvement over the EQMOD's modelling, but still it didn't put the targets dead centre. May be it needs a 100 star calibration or it may be that I'm expecting too much from my poor little EQ6. Well, for now, plate solving and re-slew technique works well for my portable setup and may look at  Maxpoint or TPoint again later on for a permanent setup, perhaps with my new AP mount arriving around in Dec 2014 I will use the 100 target.
At the end of the scope dancing routine, below window shows a summary of  the calculated errors contributing to my pointing accuracy. 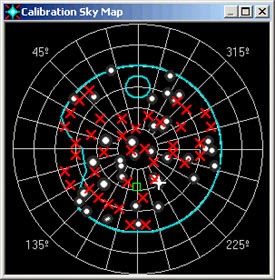 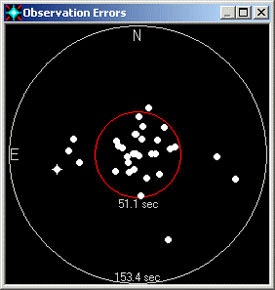