With everything in place, I could finally take the mount out for the first time after a very long wait cause by moving house to a better viewing location.

First, I wanted to try out the rough polar alignment with the green laser pointer on the scope,
Although the laser light was weak, but I could see a beam weak but noticeable to align the beam
to the North Star.

The 10Micron mount uses simple star alignments for polar alignment (3 stars for a rough alignment, a full model -20 at least for exact polar alignment), always using the hand control to select the stars , DO NOT use at this stage Model Makers or Model Creator.

One point, try to center the Polar Star with a view scope or Computer program like Maxim DL before you start any alignment, if not it will give you headaches. When the mount is not even nearly polar aligned it is difficult through a camera to center a star when it comes to the 3 or 2 star alignment, you will have to use your HC and view-scope to slew near the star.

Before polar alignment, I tried various of the 10Micron functions:

The mount moves the scope into specific positions and measures on both sides if any creates more or less friction. Measuring in RA was quick and showed that I was only 0.00% off (everything below 0.04% is considered enough for good, stable imaging). For the DEC measurement, it was a bit of by 0.02, I measured the level with a bubble level and it was good, I then moved the weights lightly down measure it again and it was spot on.

2. Orthogonality (cone error)
From the various alignment points, the mount calculates the orthogonality error. In my case it was it was out by 12' 00", I realized that the mount bubble level was not dead center, I centered it by lefting of the tripot legs. Did another test and the Orthogonality error was reduced to 2' 45". Honestly I am not sure if this is within the parameters allowed.

3. The 3 Stars Alignment (prior Polar Alignment)

People say that the  polar alignment was fairly easy, NOT TRUTH.

If you have the above correctly input into the mount database then when slewing to the first star the mount position will be very near.


At this stage DO NOT GO TO Polar Alignment yet. The next step is to add more stars after you finish the 3 star alignment (10 is enough) to the pointing model of the mount  through the Hand Control.

Now is a good time to polar-align.

Pick the Polar Align procedure from the keypad and pick a star from a list. I picked one near the meridian and fairly close to the equator. This time you must not use the hand-pad to center the star, but use the mount alt/az adjustment knobs to do the centering. Press enter when done. That’s very nearly it - but not quite as the pointing model is not that accurate as you moved the mount physically with the adjustments, but not far off. So next step is do another 3 stars alignment.

From the keypad select 2-Star Refine and pick a star from the list, the GM1000 will slew to it, halt and beep when ready and you center the star in the reticule eyepiece or the PC Screen (I use Maxim DL)  continue shooting frames (every second) and center the star.

Keep doing this in the 'Refine' to build up say a 12 to 20 star model from stars spaced widely over the sky - you can build a max of 100 stars into your model which is more practical to do (time wise) in a permanent setup. After each additional star you are told what the RMS pointing error is, is everything is working well the RMS will reduce a bit with each Refine star centered.

I experimented in three nights to learn how best to do it and how fast it could be done and how good the results are and if further model building and polar alignment iterations improved things. I performed


I tested the un-guiding without being totally accurate (with an 11 RMS) and unguided with a 900 sec image with prefect round stars. (see below)

5. Tracking precision
Without guiding, I measured the precision of the mount as-is (i.e. no model or such): << 1" !!!
That's a pretty awesome precision!!! 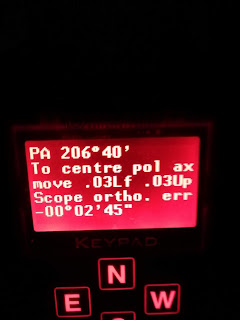 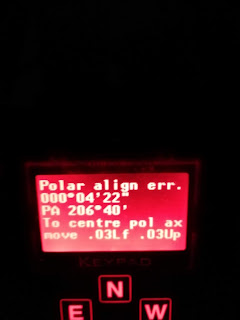 You can notice on the Hand Control screen the information about the Polar Alignment, the RMS is 11", actually the following night I managed even a low one at 7" RMS, with 12" Polar Alignment error. The screen also shows the scope Orth Errors which is at 2'. 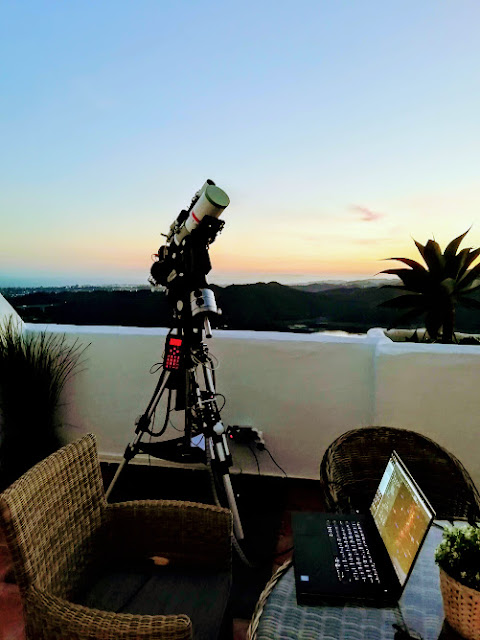