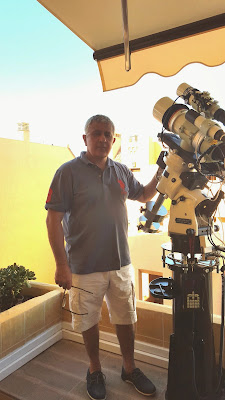 I welcome you to this blog based on astrophotography. I live in Gibraltar and the majority of the images taken  from either Gibraltar or nearby Spain. I been doing astronomy practically all my life, observation has been my passion and continue to be, but I  always had an unfinished business with astrophotography, this year 2013 I decided to move towards astrophotography. I obtained a master degree in Astronomy with Astrophysics after studying for three years in 2004. Studying astrophysics and working toward my thesis (G876)was a pure enjoyment, my next move could have been working as a astrophysicist with a astronomical institution, unfortunately I am too established to take that moved.


Astrophysicists are scientists that study the physical components of celestial objects. They study the physics of the universe as well as the interaction between the various objects which occupy it. Astrophysicists can either study the theoretical aspects of space or apply their fundamental knowledge of physics to explore various occurrences in space such as dark matter, black holes, stellar evolution, super clusters, and neutron stars.

Education Needed to Become an Astrophysicist
There is a bit of confusion about those that study normal physic and those studying astrophysics , although the physics methodology is applicable in both, the former cannot be called an astrophysicist.  It is not correct. In order to qualify for entry-level jobs in astrophysics, you typically need a Bachelor of Science (B.Sc.) degree in astronomy, astrophysics.

A Master of Science (M.Sc.) degree in astrophysics is required for most research assistant and consulting positions.

After investigating and lots of effort, I decided to increase my current equipment stock based on observation to accommodated the astrophotography. Its a start and my experience tells me to avoid impulsive purchasing, there many good products in the market, but not all would meet your requirement.
Honestly, I do have an advantage to new starters in astrophotography, over twenty years experience in stargazing and having the academes /astrophysics do help a bit, important issues as FOV, pixels, wide-field or narrow-field photography are not that difficult to understand. Therefore the extra equipment purchased at this stage are just right to start in this existing and amazing world.

If you've been thinking about spending the money (with sense)  and investing your time in trying to get your own pictures of the night sky, I have two words of advice.
DO IT!

Sure, there are tons of professional pictures out there, you can even hook up on line to some large telescopes. But there is a wonderful sense of satisfaction and awe involved in the process of taking your own pictures, not to mention the individuality and uniqueness of the pictures you take yourself.
Yes, I said unique. In spite of all the professional pictures, you never know what's going to show up in the pictures you take, satellite tracks, aircraft lights, even meteorite tracks. An almost invisible veil of clouds can add a ghostly rainbow effect, a flaring outburst of gas might erupt on a comet just as you open the shutter, who knows, you might even be the first person to photograph a passing asteroid.

And it's not nearly as difficult as it seems, some people will try to make you believe the hardness involved in astrophotography, but in reality like anything it's practice and common sense, nothing more, and  especially with all the new CCD cameras and computer aided tracking features available on modern telescopes.

Fellowship Member (2013)
Email ThisBlogThis!Share to TwitterShare to FacebookShare to Pinterest